This is the final short chapter of the French book I have describing the Grand Lenormand. It has taken me nearly a year to finally get it finished, I hope you have found this series useful! Thanks!
_______

Methods for consulting your “Large Deck of Mlle. Lenormand”

Now that you have discovered and studied the cards of the Great Deck of Mlle. Lenormand, here are some basic methods of laying out the cards used today. Additionally, you may find spreads that do not fit with their traditional interpretation because these interpretations are from my own personal research.

Nothing prevents you, like me, from creating your own methods of interpretation, quite the contrary.

But I would advise you anyways to master the spreads in this book before creating your own.

Shuffle the cards well and meditate on a precise question. Cut the deck, then return it face down to the table in front of you. Five cards are used for this reading.

Turn each card face up as they are read:

Finally, you read the relations between each subject. [using the bottom inlay images] 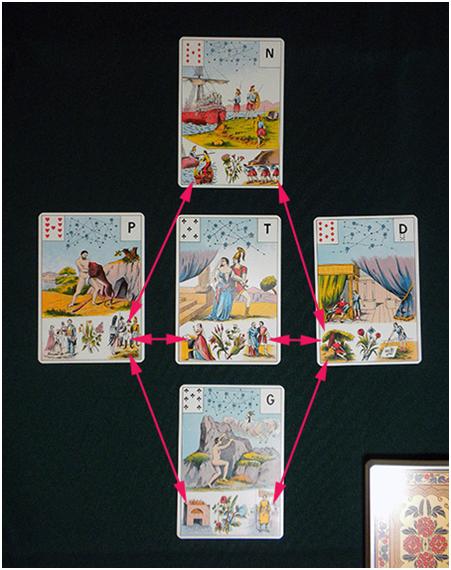 Read the general interpretation of the cards, and then make the relations between the inlay within each subject group. 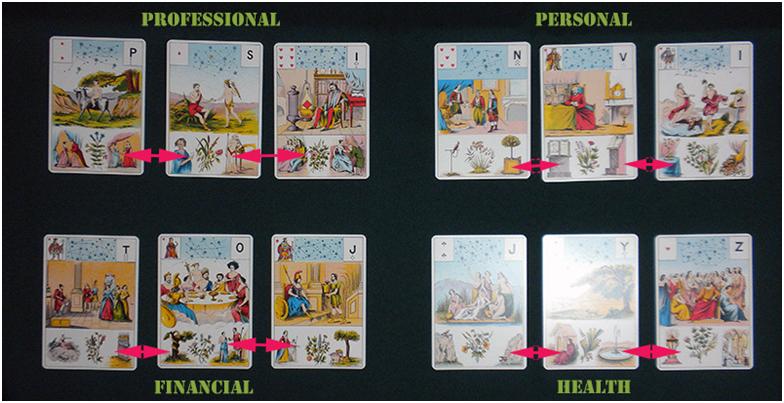 Shuffle the cards well while thinking on a precise question. Cut the deck and place it on the table in front of you, face down, and read three cards. 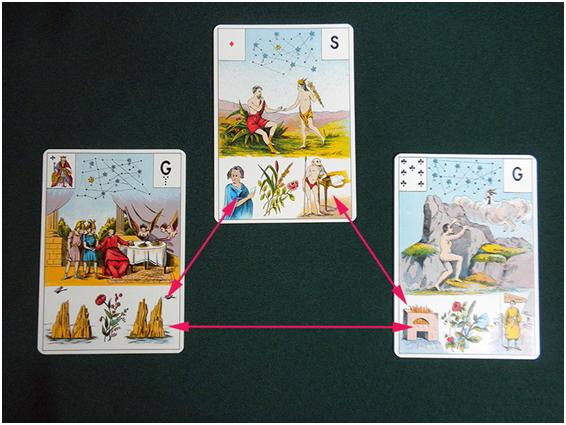 Shuffle the cards well while meditating on your hopes for the future, or those of your consultant. Cut the deck and place it on the table in front of you face down. Then spread 12 cards, counter clockwise, in a circle – starting at the “9 o’clock” position.

1st House
Represents the consultant facing himself and his character

2nd House
Represents the Finances of the consultant

4th House
Represents the parents of the consultant or their heritage

5th House
Represents children, vacations and recreation for the consultant, and also lovers

6th House
Represents work and health, also any workers around the house of the consultant

8th House
Represents death or the end of a cycle, magic, the occult, sexuality, also real estate and money

The most important house is the 10th, plus the one that you find absolutely a priority to watch out for while giving your thoughts during the reading. This spread is good for giving an overview of the coming 6 to 12 months. There is no need to read this spread on a weekly basis.