So I bought a new digital video camera a month or so ago and lately I’ve really taken to making a bunch of “show-n-tell” style videos featuring various tarot decks that I have in my collection.  With each video, I’ve tried to keep some kind of consistent ‘subject’ that ties all of the various decks together in some way. For example; pre Rider-Waite decks, decks suitable for Ren-Faires (Renaissance Faires) or SCA (Society for Creative Anachronism) events, etc.

In other news, I’ve been on another buying splurge for tarot decks.  My latest acquisitions are:

The Golden Tarot: The Visconti-Sforza Deck

The Oracle of Dr. John Dee 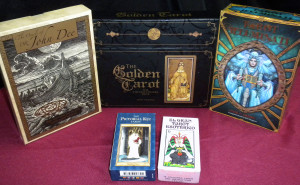 The Golden Tarot really surprised me due to its large size, but to me, that’s a bonus.  I’m still working out my impressions on the John Dee oracle, it seems like a very cool idea, but I’m not sure of this particular implementation – I would rather have had it more overtly ‘Enochian’ than it is. I think the Enochian Skrying Tarot

may be a better ‘Enochian’ oracle, and truer to Dee’s vision.  And I’ve had my eye on the Pictorial Key and the Illuminati decks for quite some time and figured I needed to get them now while the getting was good 🙂

I hope y’all had a great 4th of July weekend, and as always, Enjoy!