As the move gets inexorably closer, the more detail I’m trying to flesh out for the farming venture.  After re-reading some of the pertinent sections of my several books on the topic of growing plants for profits, I’ve started trying to lay down some concrete plans. Maybe that’s more like a gravel mulch over weed-cloth plans…

Anyways, most books (and I) agree that I should probably start out selling perennials, since the “big-box stores” have pretty much decimated the annual/bedding plants of any semblance of profit. The main exercise over this weekend has been to come up with list of perennials that provide a bloom succession throughout the growing season. For the Zone-5 I’ll be located in, that’s basically May-Sept.  I’d also like to provide this bloom succession throughout the various height scales.

So being the analytical type guy I am, what I did was make a 5×5 grid on graph paper (maybe I’ll move it to Excel after I play around with it some more), with the months May-Sept labelling the 5 columns, and the 5 rows: 6’+, 4-5′, 3′, 12-24″, and Less than 12″. And proceeded to try and fill in each cell with perennials whose bloom and height matched the labels. It was tougher than I thought – esp. at the height of summer when daytime temps. are in the triple digits. Most blooms just give up at that time of year, unless they’re night bloomers – and how do you showcase that?

It looked something like the table below, of course much bigger blanks to write in:

I’d be interested to hear from any other gardeners in how they would fill out that table. I’ll provide my results later.  For the “Tall” boxes, I usually used vines. I don’t have any trees in my sheet, although I do have some dwarf or naturally short shrubs. Here’s a pic of my “work-in-progress” table (just so ya’s know I’m not wanting you’s to do’s all my work – LOL) 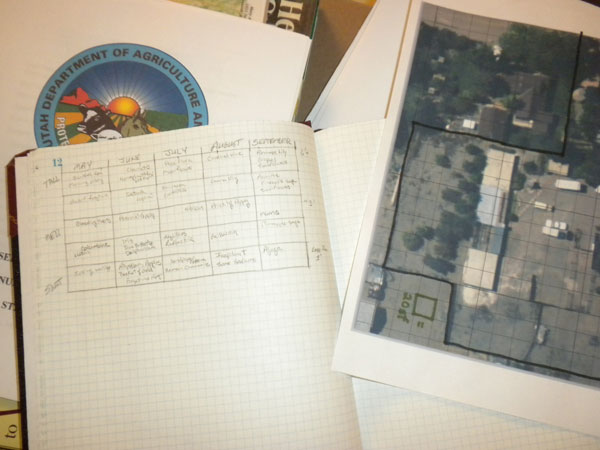 In other news, the only gaming I’ve been doing lately is the Windows built-in “MahJong Titans” LOL, what we do when we’re stressed beyond sanity.  I hope your weekend is shaping up to be very nice and all you had hoped. Enjoy!