These decks arrived via delivery van this week.  I was feeling nostalgic with a bit of cat fancy thrown in for good measure when I ordered this group 🙂 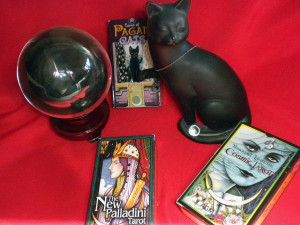 The New Palladini Tarot is a deck by the same author who did the Aquarian Tarot back in the 1970s.  The Cosmic Tarot is appropriately ‘trippy,’ and the Tarot of Pagan Cats is just one of those fun decks one has to have if they’re a cat owner and card reader, such is the case for moi.

Anyways it’s been a fun week, and hopefully I’ll get some snaps of the other decks that arrived this week and I can get that posted as well.  I think I still have 2 or 3 deck out in ‘mid-delivery’ somewhere.  They were ordered from Europe, so they’ll take a little longer to get here, although one of those did arrive today, so I’ll try to get pics up ASAP.  I hope your weekend has been amazing, Enjoy!