So the second batch of tarot decks I had on order have arrived!  I do still have 2 or 3 on their way from Europe, but I believe all of the decks I ordered from domestic (USA) sources have arrived.  After I started going through them, I noted that three of the decks (nearest the top in the photo below) are quite outside the norm. Here is what I got: 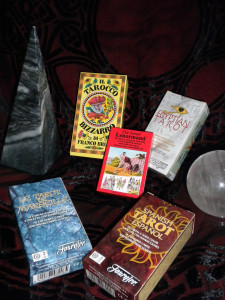 The Tarocco Bizzarro is just that, very strange and cartoonish, but that’s the main reason I got it – because it is so different. Here’s a sample: 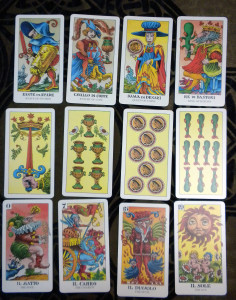 The Egyptian Tarot by Fournier is also quite different.  The trumps begin at 1 with the Magician and the Fool is numbered 22.  It is a 78 card deck, but there are no ‘minor arcana.’  It’s as if the trumps just carry on all the way to the last card, which is numbered 78.  The LWB does imply that the cards from 23 to 78 are ‘minor’ – but it certainly isn’t obvious by simply looking at the cards. 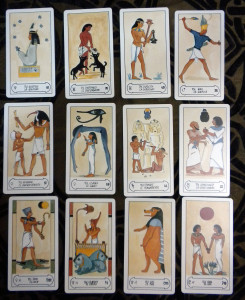 The next ‘odd’ deck is this version of the Petit Lenormand that uses images from the Grand Lenormand (which don’t relate in any shape or form to the images normally found on petit Lenormand decks). However, it does have the common designations noted in the upper right corner of each card. 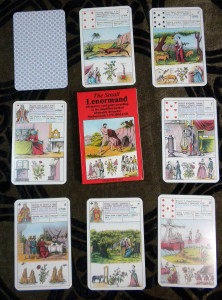 The last two decks are fairly standard “Marseilles” style decks, both published by Fournier; The Spanish Tarot and Tarot of Marseilles. 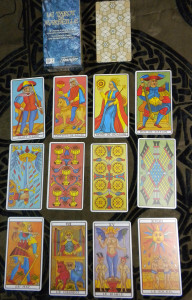 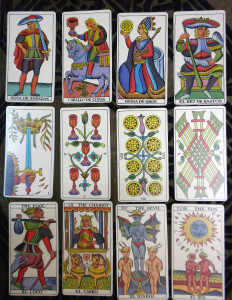 I hope you enjoyed the tour through my latest decks. All I have to say is that joining a tarot based FB group has proven to be very detrimental to my pocketbook! 😀   Enjoy!